Our latest app cricket updates hit the windows phone marketplace recently.  It basically combines cricket results and news into a series of lists encapsulated in a panaorama control.

As with most of our other apps we have chosen to make cricket updates free and ad-supported.   However instead of using our usual ad network pubcenter, we decided to try out nokia ad exchange.  So far the results have been interesting.

I't s still too early to tell as the app has only raised 731 ad requests, but the early indicators would suggest that we could expect fairly similar results to pub center.  (See screenshot below). 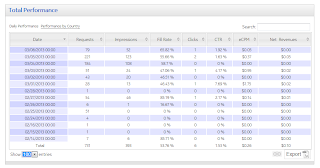 One thing I like is that nokia ad exchange provides a lot more analytics than pub center.  As you can see in the screenshot above the click thru rate has a huge impact on eCPM.  Fill rate is also useful, especially if we want to target different ad networks based on geographical location.

So far the jury is still out on nokia ad exchange.  But given the initial results I believe it will most likely become part of our future strategy.  Particularly in markets where pubcenter's eCPM is almost non-existent.
Posted by chris at 11:22 PM