Why am I getting such a low eCPM?

At the moment we are making most of our (very modest) advertising revenue from one app;  FB Viewer.  Currently about $75 / week from that app and another $5-10 / week from our other 8 free apps.

The impressions for this app has been steadily growing over the last 7 days but the low eCPM is killing us.  (See graphs below) The last few days we've had over 16,000 impressions each day for FB Viewer but with an eCPM which has today hit an all time low of 0.44 USD this isn't equating to much.

The truth is I don't really know. No one outside of Microsoft does. I've searched the pub center forums and read various blogs on this and there is a lot of theories but no solid information. From what I can tell the main factors affecting eCPM are as follows:

The more research I've done the more I've realised there is very little I can do to try and improve the eCPM I get.  However the following (very loose) guidelines may help you if you're developing wp7 apps and using pub center to serve ads:
If you have more information on this topic leave a comment or hit us up on twitter.

Our tenth app has just been approved on the windows phone 7 marketplace.  Sweet!

It allows you to choose a point in time in one timezone and see what the equivalent time will be in another timezone.  Great for organising overseas phonecalls and online meetings etc.

Posted by Mayhem Software at 12:27 AM No comments:

Beware of the longlistselector.

I just finished and submitted our new app 'Timezone Converter' and feel I should warn people about a few issues I encountered with the longlistselector control.

The November 2011 update of the wp7 toolkit includes a longlist selector which is great for grouping together a long list of items. We used it for timezone regions. See screenshots below. 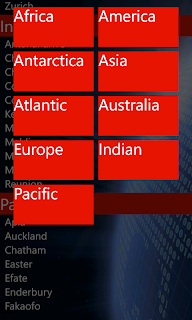 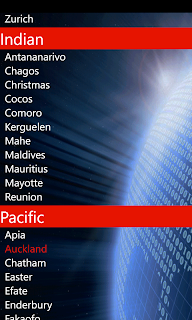 Overall the list worked great and in a fairly short amount of time I was able to populate the list with world timezone regions which were nicely grouped together under click-able headingss that allow the user to easily jump to different sections of the list.  (For information on working with timezones in wp7 see my earlier post on using the zoneinfo api in wp7).
Unfortunately I encountered two bugs in the control which I ended up wasting way too much time on.  The first problem is that binding the selecteditem did not work.  If you are using mvvm you will find this especially annoying.  The issue as well a workaround is described in detail here.
The second issue (for which I found no information on the internet) can be repeated as follows:
This bug was an absolute pain to get to get to the bottom of.  I tried to workaround it by just changing the margin of the grid containing the longlistselector so that it was either in view or out of view but this did not help. I also tried removing it from a grid and placing it in a stackpanel as well as just updating the longlistselector's visibilty directly but had no joy with that either.   In the end the workaround I used was simple.  I left the longlistselector as always being visible and just placed the grid containing my default form in front of it.  Instead of toggling the visibility on the longlistselector grid Ijust toggled the visibility of this default form and everything worked fine.
Another obvious workaround would have been to just embed the longlistselector in a different xaml page and navigate back and forth between my main page and the longlistselector page.  However as my app was already working other than this bug I chose the first option.
I hope this helps someone as it took me quite a while to get to the bottom of both of these issues.
Posted by Mayhem Software at 5:36 PM 3 comments: